Template:Use mdy dates Script error: No such module "For". An Act of Congress is a statute enacted by the United States Congress. It can either be a Public Law, relating to the general public, or a Private Law, relating to specific institutions or individuals.

The term can be used in other countries with a legislature named "Congress", such as the Congress of the Philippines. 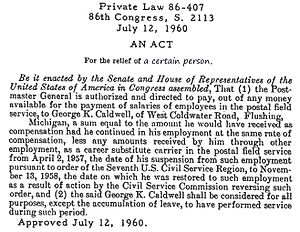 File:Page 212 from STATUTE-073-1-2 Public Law 86-90.pdf In the United States, Acts of Congress are designated as either public laws, relating to the general public, or private laws, relating to specific institutions or individuals. Since 1957, all Acts of Congress have been designated as "Public Law X-Y" or "Private Law X-Y", where X is the number of the Congress and Y refers to the sequential order of the bill (when it was enacted).[1] For example, P. L. 111-5 (American Recovery and Reinvestment Act of 2009) was the fifth enacted public law of the 111th United States Congress. Public laws are also often abbreviated as Pub. L. No. X-Y.

When the legislation of those two kinds is proposed, it is called public bill and private bill respectively.

The word "act", as used in the term "Act of Congress", is a common, not a proper noun. The capitalization of the word "act" is deprecated by some dictionaries and usage authorities.[2][3][4][5][6][7][8] Some writers, in particular the U.S. Code, capitalize "Act". This is likely a result of the more liberal use of capital letters in legal contexts, which has its roots in the 18th century capitalization of all nouns as is seen in the United States Constitution.

"Act of Congress" is sometimes used in informal speech to indicate something for which getting permission is burdensome. For example, "It takes an Act of Congress to get a building permit in this town."

An Act adopted by simple majorities in both houses of Congress is promulgated, or given the force of law, in one of the following ways:

Through the process of judicial review, an Act of Congress that violates the Constitution may be declared unconstitutional by the courts. The judicial declaration of an Act's unconstitutionality does not remove the law from the statute books; rather, it prevents the law from being enforced. However, future publications of the Act are generally annotated with warnings indicating that the statute is no longer valid law.

Template:Wikisource Script error: No such module "Side box".