Pre-Conception and Pre-Natal Diagnostic Techniques (PCPNDT) Act, 1994 is an Act of the Parliament of India enacted to stop female foeticides and arrest the declining sex ratio in India. The act banned prenatal sex determination. Every genetic counselling centre, genetic laboratory or genetic clinic engaged in counselling or conducting pre-natal diagnostics techniques, like in vitro fertilisation (IVF) with the potential of sex selection (Preimplantation genetic diagnosis) before and after conception comes under preview of the PCPNDT Act and are banned.[1][2][3]

This process began in the early 1990 when ultrasound techniques gained widespread use in India. There was a tendency for families to continuously produce children until a male child was born.[4] Foetal sex determination and sex selective abortion by medical professionals has today grown into a Rs. 1,000 crore industry (US$ 244 million). Social discrimination against women and a preference for sons have promoted female foeticide in various forms skewing the sex ratio of the country towards men.[5] According to the decennial Indian census, the sex ratio in the 0–6 age group in India went from 104.0 males per 100 females in 1981, to 105.8 in 1991, to 107.8 in 2001, to 109.4 in 2011. The ratio is significantly higher in certain states such as Punjab and Haryana (126.1 and 122.0, as of 2001).[6]

The main purpose of enacting the act is to ban the use of sex selection techniques after conception and prevent the misuse of prenatal diagnostic technique for sex selective abortions. 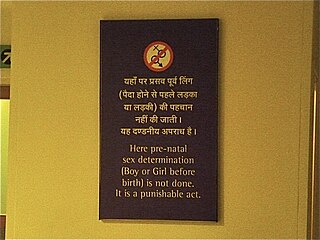 A sign in an Indian hospital stating that prenatal sex determination is a crime.

Offences under this act include conducting or helping in the conduct of prenatal diagnostic technique in the unregistered units, sex selection on a man or woman, conducting PND test for any purpose other than the one mentioned in the act, sale, distribution, supply, renting etc. of any ultra sound machine or any other equipment capable of detecting sex of the foetus. Main provisions in the act are[8]

Implications of the amendment are

Lua error in package.lua at line 80: module 'Module:ResolveEntityId' not found.