From Advocatespedia, ASSN: 124435
Jump to navigation Jump to search

Template:History of India The States Reorganisation Act, 1956 was a major reform of the boundaries of India's states and territories, organising them along linguistic lines.[1]

Although additional changes to India's state boundaries have been made since 1956, the States Reorganisation Act of 1956 remains the single most extensive change in state boundaries since the independence of India in 1947.

The Act came into effect at the same time as the Constitution (Seventh Amendment) Act, 1956,[2] which (among other things) restructured the constitutional framework for India's existing states and the requirements to pass the States Reorganisation Act, 1956 under the provisions of Part I of the Constitution of India, Articles 3 & 4.

Political integration after independence and the Constitution of 1950 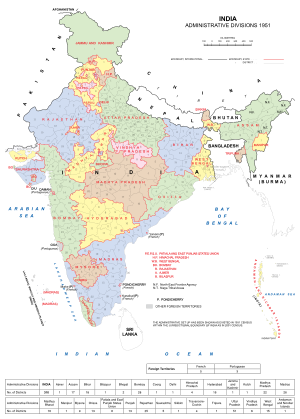 Administrative divisions of India in 1951. Note that Sikkim was independent until 1975.

British India, which included present-day India, Pakistan and Bangladesh, was divided into two types of territories: the Provinces of British India, which were governed directly by British officials responsible to the Governor-General of India; and the Indian States, under the rule of local hereditary rulers who recognised British suzerainty in return for their own kingdom, in most cases as established by treaty. As a result of the reforms of the early 20th century, most of the British provinces had directly elected legislatures as well as governors, although some of the smaller provinces were governed by a chief commissioner appointed by the Governor-General. Major reforms put forward by the British in the 1930s also recognised the principle of federalism, which was carried forward into the governance of independent India.

On 15 August 1947, British India was granted independence as the separate dominions of India and Pakistan. The British dissolved their treaty relations with more than five hundred princely states, who were encouraged to accede to either India or Pakistan, while under no compulsion to do so. Most of the states acceded to India, and a few to Pakistan. Bhutan, Hyderabad and Kashmir opted for independence, although the armed intervention of India conquered Hyderabad and brought it into the Indian Union. 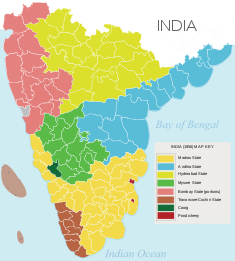 South Indian states prior to the States Reorganisation Act

Between 1947 and about 1950, the territories of the princely states were politically integrated into the Indian Union. Most were merged into existing provinces; others were organised into new provinces, such as Rajputana, Himachal Pradesh, Madhya Bharat, and Vindhya Pradesh, made up of multiple princely states; a few, including Mysore, Hyderabad, Bhopal, and Bilaspur, became separate provinces. The Government of India Act 1935 remained the constitutional law of India pending adoption of a new Constitution.

The new Constitution of India, which came into force on 26 January 1950, made India a sovereign democratic republic. The new republic was also declared to be a "Union of States".[3] The constitution of 1950 distinguished between three main types of states and a class of territories:

The demand for states to be organised on a linguistic basis was developed even before India achieved independence from British rule. A first-of-its-kind linguistic movement started in 1895, in what is now Odisha. The movement gained momentum in later years with the demand for a separate Orissa Province to be formed by bifurcating the existing Bihar and Orissa Province.[5][6] Due to the efforts of Madhusudan Das, the Father of Odia nationalism, the movement eventually achieved its objective in 1936, when Orissa Province became the first Indian state (pre-independence) to be organised on the basis of common languages.

The post-independence period saw the ascent of political movements for the creation of new states developed on linguistic lines. The movement to create a Telugu-speaking state out of the northern portion of Madras State gathered strength in the years after independence, and in 1953, the sixteen northern Telugu-speaking districts of Madras State became the new State of Andhra.

During the 1950–1956 period, other small changes were made to state boundaries: the small state of Bilaspur was merged with Himachal Pradesh on 1 July 1954; and Chandernagore, a former enclave of French India, was incorporated into West Bengal in 1955. However, post-independence, the first state to be created on a linguistic basis was Andhra in 1953, created out of the Telugu-speaking northern parts of Madras State.

The States Reorganisation Commission was preceded by the Linguistic Provinces Commission (aka Dhar Commission), which was set up in June 1948. Prime Minister Jawaharlal Nehru appointed the States Reorganisation Commission in December 1953, with the remit to reorganise the Indian states. The new commission was headed by the retired Chief Justice of the Supreme Court, Fazal Ali; its other two members were H. N. Kunzru and K. M. Panikkar. The efforts of the commission were overseen by Govind Ballabh Pant, who served as the Home Minister from December 1954. 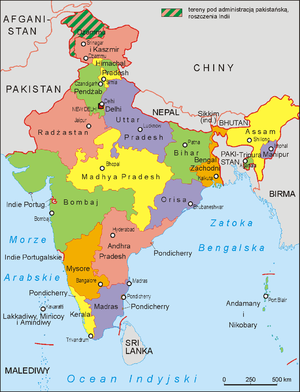 Related changes by other legislation

The States Reorganisation Act was enacted on 31 August 1956. Before it came into effect on 1 November, an important amendment was made to the Constitution of India. Under the Seventh Amendment, the existing distinction among Part A, Part B, Part C, and Part D states was abolished. The distinction between Part A and Part B states was removed, becoming known simply as "states". A new type of entity, the Union Territory, replaced the classification as a Part C or Part D state.

Effect of the changes

The States Reorganisation Act of 1956 was a major step towards dividing India into states and Union Territories. The following list sets out the states and union territories of India as reorganised on 1 November 1956: